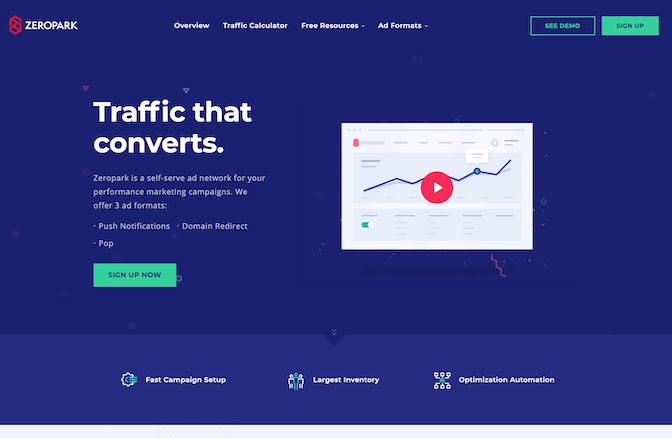 If you're looking for an ad network whose volume is close to what a DSP can provide, then look no further than Zeropark. Not only does this network have volume, but it also has several types of traffic for you to choose from.

Zeropark was established in 2011 and is one of the few pop traffic sources that remained even while others from the same generation of ad networks closed down. Let's take a look at how Zeropark stood the test of time.

Zeropark has three kinds of traffic in its database:

This network sends a whopping 65 to 70 billion pop ads per month. Traffic is worldwide, but users can be narrowed down based on country, city, and region. Running a multi-geo campaign is also possible.

Advertisers can narrow their audiences down via keyword, target, and sources. You can also choose between mainstream or adult. All other targeting options available in other networks are here as well, such as device, OS, and browser.

This is also called zero-click ads, which means the user need not click on anything for the ad to open up. The ad opens up on the active tab where the user typed a parked domain on the URL bar, which increases the chance of user interaction.

Under this ad format, advertisers can choose between Classic Push and In-Page Push. The latter is not actually a push notification ad; instead, it is a banner ad that imitates push ads within publisher websites. It will even show up in iOS devices as it is not device-dependent, unlike Classic Push Ads.

The ad network has more than two billion classic and in-page push ads in its database.

We've already mentioned the targeting options of each traffic type above. As compared to other traffic networks, Zeropark allows you to hyper-target your audiences using Keywords, Target, and Sources. This is more than what other networks offer.

Here's how they differ from each other:

One source will likely have several targets (or domains) under its wing. If a source owns three websites and all of these send traffic to Zeropark, then your ad will show up on all three websites.

This is one of Zeropark's coolest features. You don't just get information on how much traffic they have per country, you can even narrow it down in several ways:

It also displays the average bid per click or per view, so you can accurately plan your campaigns.

Even if you create a campaign on a weekend, you can expect your campaign to be approved within the day. It can take anywhere from a few minutes to several hours.

If you want to get rid of the manual work of optimization (ie. pausing specific keywords and targets that don't convert), you can set up rule-based optimizations. You can create up to 6 optimization rules per campaign.

To understand how to use Zeropark, how they display reports, how to create a campaign, how to optimize, and more, you can log in to the demo account. You can tinker around the dashboard, create new campaigns and even edit/optimize existing sample campaigns.

Zeropark is on a CPV and CPC bidding model. CPV is used for domain redirects and pops, while CPC is used for push notification ads.

The minimum deposit amount is $200 for credit cards, WebMoney, PayPal, and Paxum. Adding funds through bank transfer is also possible, but for a minimum of $1,000.

Except for bank transfer, all funding options are charged a service fee. The charges are:

One of the best things about Zeropark is that you can use it to run a small campaign, yet you can also use it to scale. Their immense traffic volume will never disappoint.

As is common with pop traffic though, bot traffic can be a problem, especially with RON campaigns. Zeropark continuously improves its technology to prevent bot and fraud traffic from coming in, but it would still be a good idea to have a bot filter.

Nevertheless, Zeropark is still one of the best traffic sources out there. Once you have tried other sources and saved enough for the initial deposit, you should try running campaigns in this network.

The minimum payment and the various payment methods available at Zeropark ad network.

Optimization, Targeting and Other Features

Targeting, optimization and other features available at Zeropark advertising network.

Aggregated ratings and reviews for Zeropark.